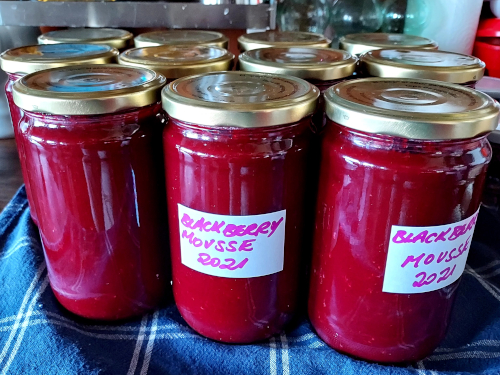 This recipe solves the problem of what to do with the avalanche  of blackberries that we have at the end of every July. We don’t eat a lot of jam so this is perfect for us. In the 1970’s, my mother used to make a foamy mousse made out of jelly and evaporated milk.  We have now got enough bottled blackberry juice to make over 100 portions. It is packed with vitamin C and the gelatine is apparently very good for bones and reduces osteoporosis.

Blackberries are now in full flow and although I’ve been making blackberry mousse every couple of days and blackberry jam, I thought it would be a good idea to find a way of making a blackberry syrup that could store and that could be mixed with whipped evaporated milk at a later stage. That way, we could summon up summer at any time in the future.

The basic quantities are 750g blackberry juice, 15g glycerine and 50g sugar. In percentage terms this amounts to 2% glycerine and 6.7% sugar. 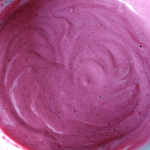 These are the quantities for 750ml of blackberry juice and 330ml evaporated milk.

To make up the mousse, use 330ml evaporated milk for 750ml blackberry juice. Whisk the evaporated milk until thick and you can see trace on the surface. Combine the juice and milk and mix well. Put in the fridge to set overnight. 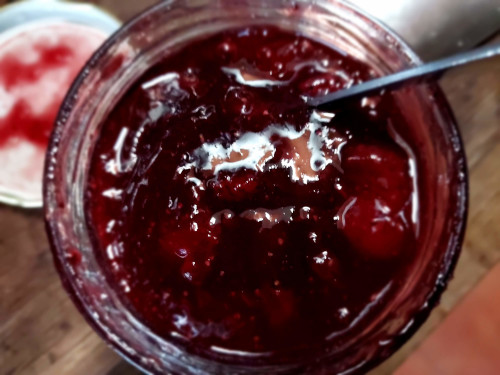 Now that the strawberry season is well under way and we are getting lots of delicious, ripe strawberries, I thought it would be a good idea to make some jam. In the past, I’ve used a different, quicker method that makes a runnier jam, but this time I wanted a more solid one.

This recipes uses 40% sugar so as we had picked 2.2kg of strawberries, I added 880g sugar. 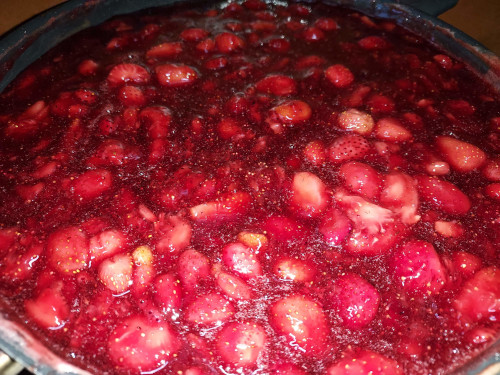 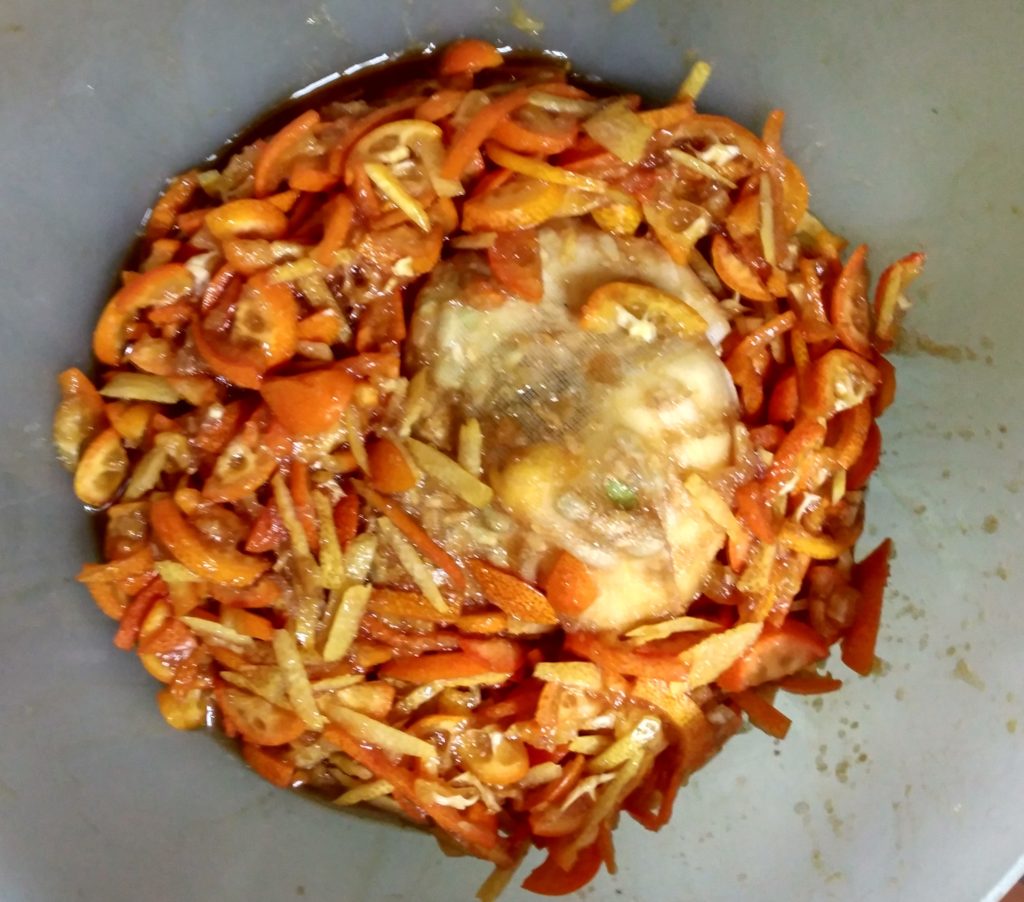 I have never made marmalade before and have always been put off by the seemingly  never-ending, tedious task of chopping, peeling, shredding, juicing, boiling, testing, etc. But when a friend told me about his method of making kumquat and lemon marmalade by soaking the fruit in sugar for a day, I thought I would give it a go. In his recipe, the kumquats are halved, the pips removed, and then combined in a bowl with lemon juice and sugar for 24 hours before boiling as normal.

My challenge, therefore, was to invent a recipe for a pressure cooker which would be even easier and quicker to prepare. A neighbour’s sister makes quince jelly in a pressure cooker by combining equal parts of fruit and sugar and then cooking for 3 minutes at pressure so I decided to experiment with times to see if this method would be possible for marmalade.

The first attempt was a success (although the cooking times needed tweaking) and I was really pleased with the consistency, texture and taste of the first batch. I had literally thrown everything in together (pips, pith and lemon quarters) but decided that for the second attempt I would tie the pips and lemon pith and skins in muslin to keep them separate.

It was clear that three minutes was far too short and I had to bring the cooker back up to pressure several times. So I decided that for the second attempt I would cook the marmalade for 15 minutes at pressure.

METHOD
Cut the kumquats in half, remove the pips and save on a muslin square. Cut the loquats into 2mm slices.
Peel the lemon rind with a vegetable peeler. Shred the rind into 2mm strips.
Put an empty bowl on the scales and weigh in the fruit and lemon juice. Add half the amount of sugar and mix well.
Securely tie up the lemon pith and pips in the muslin square and add toe the bowl of fruit.

Leave for 24 hours, stirring every so often. At the end of that time, the sugar will have completely dissolved and there will be quite a bit more syrup.

Open the pressure cooker and transfer immediately into clean glass jars using a jam funnel and a measuring jug. Turn all the jars upside down to sterilise the caps for about half an hour and then turn back the right way and leave to cool completely.

The method is the same as before but by adding a knob of butter, scum doesn’t rise to the top so much.

This year we had bought some jam sugar when we were in England so I decided to try it out with the strawberries I had picked today.

They weighed just over 1kg so I added 400g of jam sugar and scrunched them up with my hands in a bowl. 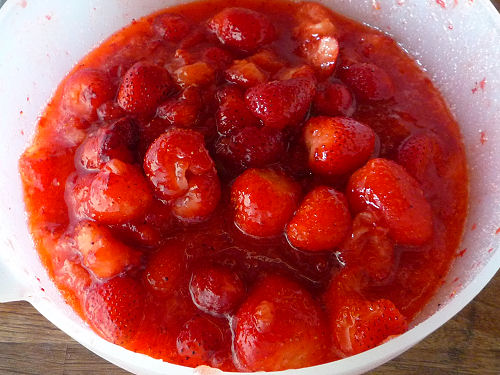 I poured the mixture into a frying pan and brought it to the boil. I left it to boil for another 10 minutes before pouring into clean, sterilised jam jars.

In previous attempts, I skimmed the foam from the surface but this time I didn’t bother. As they say in Spain “Si no mata, engorda” (= What doesn’t kill you will make you fat). 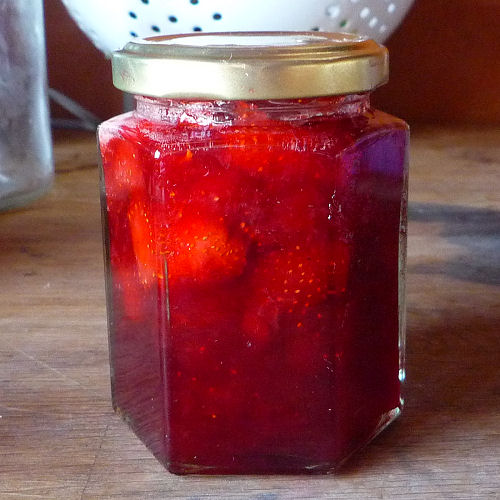 This is a gallery